As would be expected there was much need for soap, and regular purchases were made from companies such as F.S Cleaver & Sons in nearby (Twickenham) and the Veda Soap Works at (Willsden Junction).

There were also deliveries of starch and blue, in returnable bottles and carboys, from W. Hatton & Sons at Wormwood Scrubs. (carboy = 20 to 60 litres) 4-12 gallons

On a price list dated May 1879 from The Argyll Steam Laundry, Hammersmith there is a footnote – ‘Laundry Senders may have their own Hampers or Baskets, with lock and key…….’

The following is an entry in the Suppliers Ledger at the London Metropolitan Archives for W.T. Ellmore & Son Ltd:

W.T Ellmore Ltd (cane/willow/basket workers) were based primarily in Thurmaston, near Leicester but had showrooms on the City Road, London and in Manchester and Glasgow.

By 1881 William Ellmore was running a successful business. The 1881 census records the family at 25 Clyde Street Leicester.

William Ellmore (28) is described as a ‘Willow, Cane and Bamboo Worker’ employing 41 men and 5 boys, his wife Mary (25), and 2 children, Ernest (2) and Maud (1). The 1911 census finds the family at 91 London Road Leicester. It details the fact that there had been 10 children born to the couple, but only 7 still alive. Their daughter Gladys (20) is a willow worker. Nellie (17) and Norah (13) are attending school. William has retired from the business and is the director of 2 hotels.

Much of the food supply came from the farm and garden. This was supplemented with deliveries from local independent shops, major stores and national outlets.

Purchases of custard, jelly, jam, fish, flour and lemonade crystals are just a few items on the extensive list to be found in the Suppliers Ledger.

Records at the LMA show there were regular purchases of lemonade crystals from Foster Clark Ltd (Maidstone):

Foster Clark understood the value of advertising and adopted the Eiffel Tower as the trademark. In 1895 the firm moved to the Chambers jam factory premises in Hart Street, which became the Eiffel Tower works. Expansion made Foster Clark a nationally known brand name in the years before the First World War, producing a range of convenience foods which included custard powder, jellies and canned goods. The company’s employees were mainly women, many of whom travelled to work from the local villages. Foster Clark’s was badly affected by the arrival of frozen foods. The company was bought out by Oxo in 1965 after going into receivership.

The product is remembered with fondness (by its brand name) in literature,

‘…… Buff Lane was perhaps one of my favourite places during the summer months … It was a place of happy memories. A place where I could go alone on my old black bicycle, or just walk and play with my friends … We would each take a bag of food and our bottles of water along with a pack of Eiffel Tower lemonade powder to make up a refreshing drink …..’

George Foster Clark became mayor of Maidstone. He died in 1932. His estate was worth just over half a million pounds. As a leading philanthropist he left gifts of land and money to the town. His name lives on in the shape of the Foster Clark Estate.

No doubt the drink contained sugar in addition to the acclaimed ‘fresh lemons’.

There were purchases of toothbrushes from R Hovenden & Sons (89-95 City Road). And Mr Fox a local dentist from Hampton Road was invoiced for his regular visits.

There had been a Studio from 1883 at 9 Surbiton Park Terrace prior to the arrival of G.T. Jones.

Early adverts claimed ‘TRAMS stop at the door’ but this is later replaced by ‘the STUDIO being halfway between Kingston & Surbiton stations and buses either way stop outside’.

The Studio had a reputation for ‘Portraits of distinction…’ be it wedding and family groups, garden views and interiors. However ‘child studies’ remained a popular speciality. An advertisement claims ‘… children love being photographed at the studio … and their parents are delighted with the results…’.

The 1891 census records George Thomas Jones (47), widower, photographer with his son George William Jones (21) at 9 Surbiton Park Terrace. Business was thriving by 1908. Kingston Corporation commissioned a series of Surbiton Official Guides, published by the Suburban and Provincial Development Association, which contain many photos attributed to G.T. Jones & Son. A collection of photos can be viewed (on request) at the Kingston Heritage Centre. 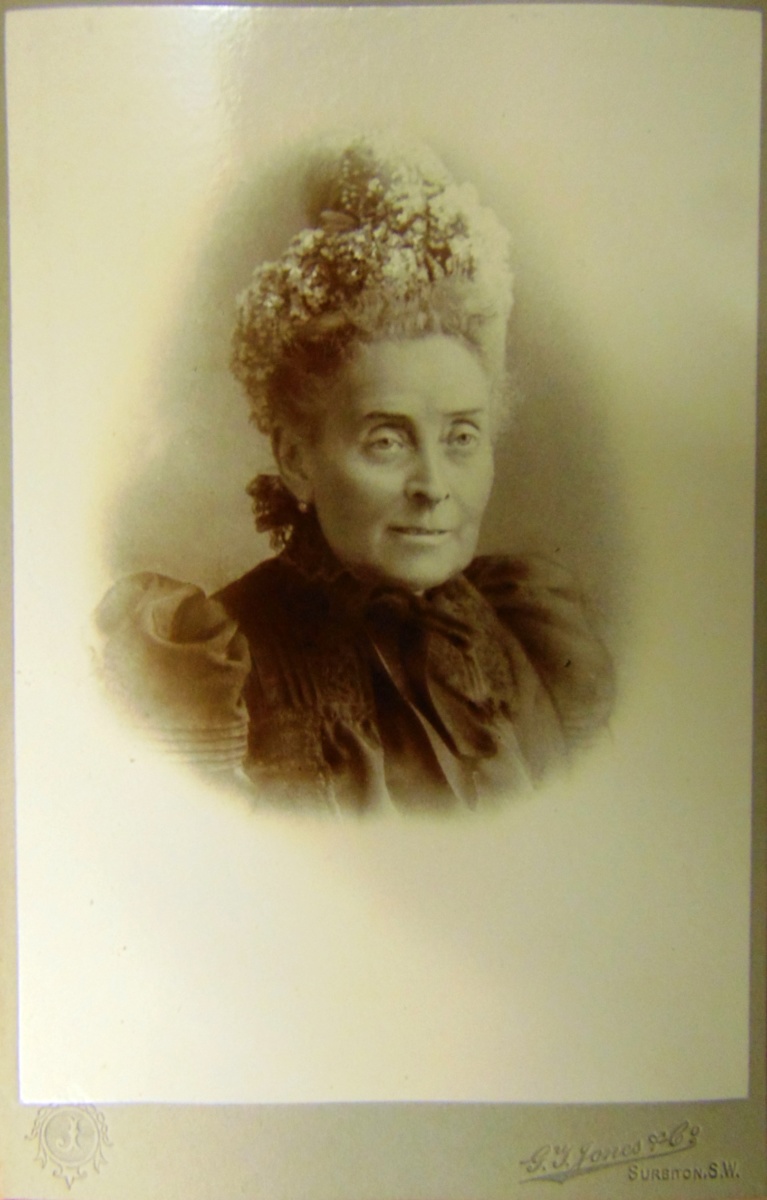 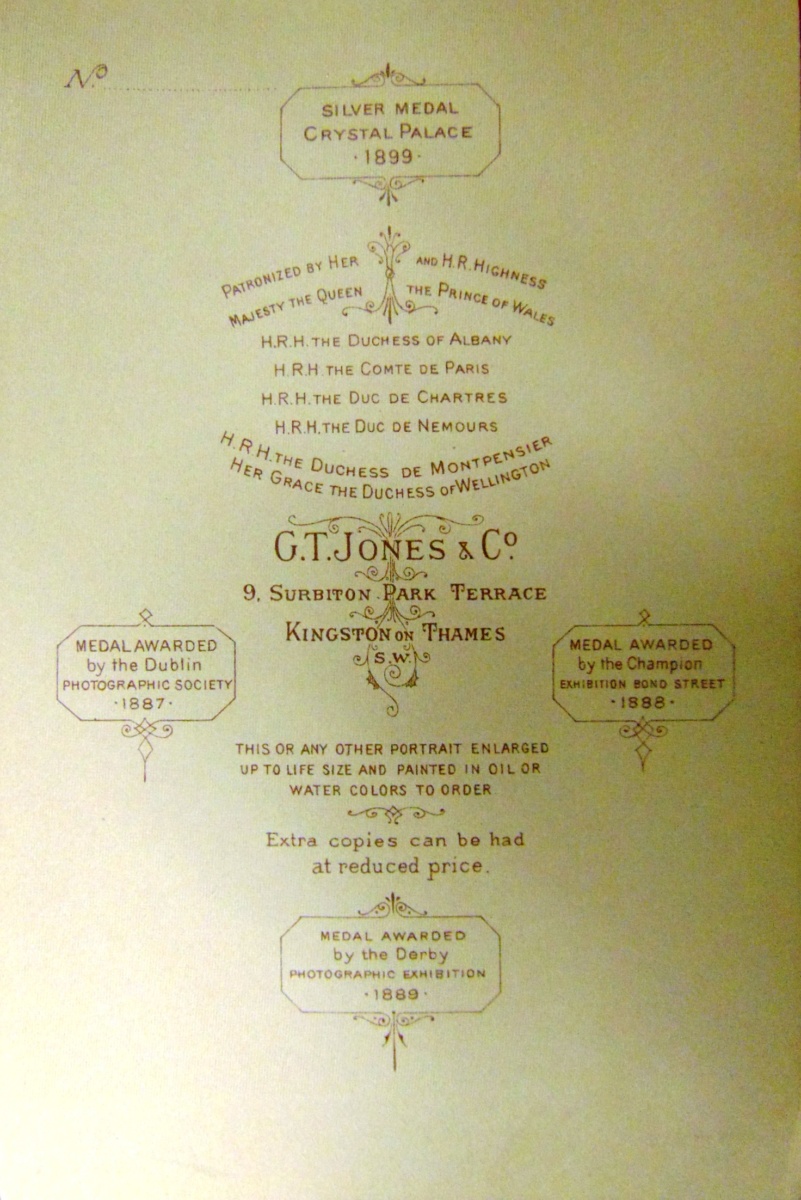 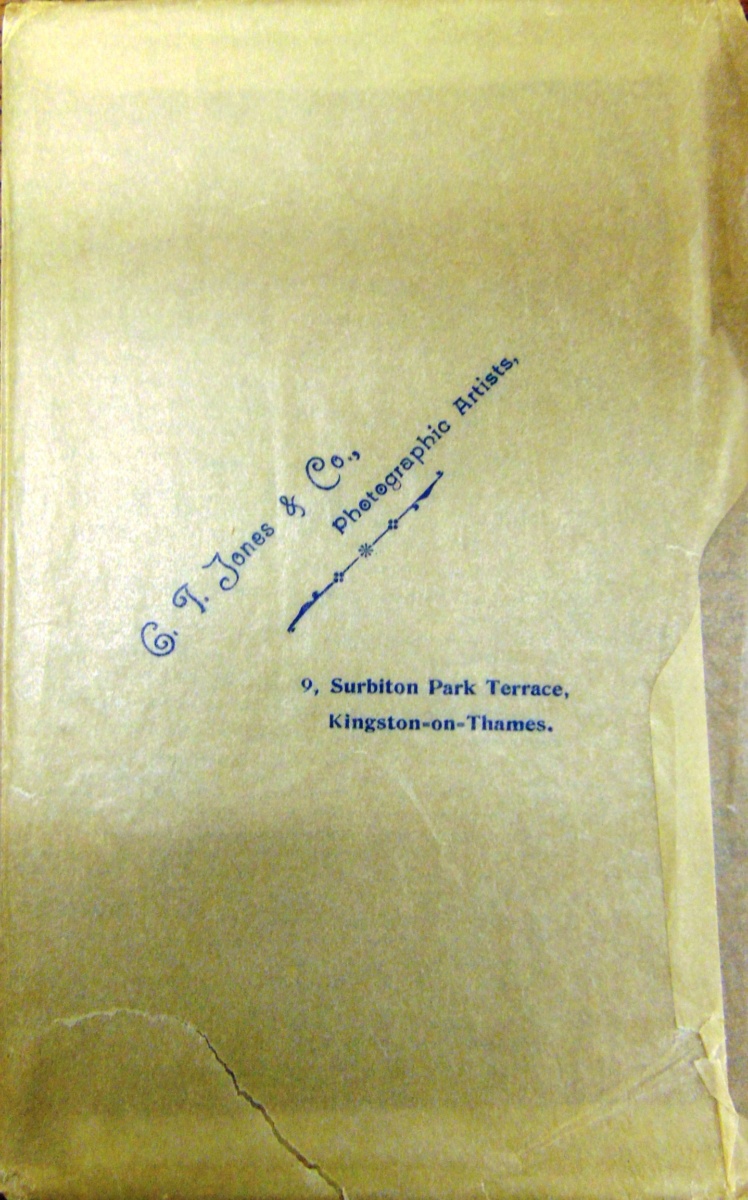 A photograph of Mrs Mary Langdon Down (taken by G.T. Jones & Co) in its original protective envelope is in the archive at the Langdon Down Museum.

The 1912 Series (from glass plate negatives) contains photos from: North Wing (Boys), South Wing (Girls), Trematon (Boys), Conifers (Girls and Boys). Of the 129 individuals we have been able to match 96 to the 1911 Normansfield census return.

The amount of entries in the Suppliers Ledger makes us confident that the original glass plate negatives are the work of G.T Jones & Co.

For most of the people in the collection there are 2 images. One photo taken facing the camera and another from the side.

We looked at 8 year old Leonard Bickle because his surname has been transcribed in various ways on different source documents. By chance we discovered, in the museum archive, 2 invoices both dated 1922, one being for a floral tribute from a florist in Hampton Wick and another from Hide and Co of Kingston who arranged his funeral and headstone.

A copy of his death certificate was obtained from the General Register Office. Leonard was born in Adelaide in 1904. He died at Normansfield in the summer of 1922. The cause of death being attributed to epilepsy. He is buried at Kingston Cemetery in grave 513.

His father also named Leonard was born 1857 in England at St. Leonards on Sea and had 7 sisters and a brother. Twins Clara and Alice born 1859, followed by Annie (1860), Thomas (1862), Letitia (1863), Edith (1864), Lucy (1867), Susan (1869). He trained as doctor and worked at both St Thomas’s and Queen Charlottes’. In 1884 he went on a visit to Australia and decided to stay. Leonard married Elizabeth McNeil in 1886 and they had 3 children Neil, Dorothy and Kathleen. After moving to Adelaide in 1897 he worked at the Adelaide Hospital as well as in private practice. Following the death of his wife he married Jane Brown Fraser in 1901. There were 2  more children, Agnes, and Leonard Fraser. Leonard retired from practice in 1913 but volunteered for active service in WW1 with the Australian Army Medical Corps. He died in 1921.