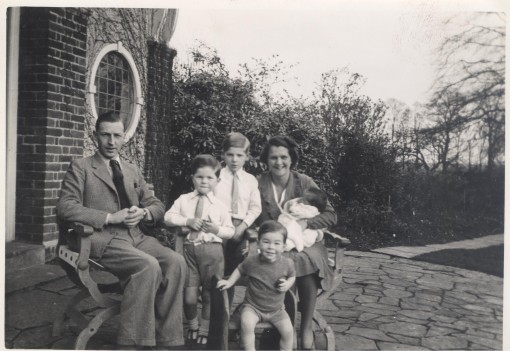 Tony entered Normansfield at the age of 6 on 21 July 1945 and remained there until itclosed 51 years later in 1997. He arrived as the war ended when it was run privately byDr Reginald Langdon Down, a son of its founder and left when the NHS, which had takenit over, transferred the residents to care in the community. During this period there wereno significant personal events whilst he was supported by caring staff and regular visits by members of his family. 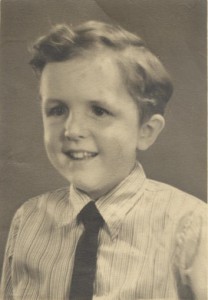 Tony aged 6 to 7 years, a photo hung above his mother’s bed.

Tony was born on 7 March 1939 just before the outbreak of war, the youngest of four boys,and into a family with no health problems or record of disability. The family home in Essexwas requisitioned and they were evacuated to an old thatched house in Chideock, a smallvillage by the coast near Bridport in Dorset. A nanny went with them whilst their father remained behind to continue his business of manufacturing in North East London. He visited during the blackout at weekends, when he could. Many happy days were spent on the beachwhere they were given special permission because of the coastal defences against possible invasion. As the war came to an end, the family returned to their home in Essex. By now Tony’s three brothers were all away at boarding school and it was noticed that he was not speaking nor acquiring the basic skills of a six year old, but he was placid and cheerful. Dr Paul Sandifer,a neurologist at Great Ormond Hospital, was consulted. No clear diagnosis was made apartfrom failure of brain development from possible hydrocephalus. He had a large head andthe presence of bilateral talipes, club foot, requiring calipers. He recommended that Tony should go to Normansfield.

Tony started at Trematon, a large Georgian House on the Normansfield estate near the river.His mother visited him regularly, usually taking him out to tea with his aunt and family wholived in Twickenham. Her affection and care for him never varied all his life and was nodifferent to that of her other sons. He was never neglected just because he was no longerat home. Having been orphaned in childhood herself, this made all her children the more precious to her. When she died of cancer aged 66 years, her second son Trevor, a GP in London, took over the visiting.

When the NHS took over Normansfield in 1951, Tony was assigned to an amenity bed ata charge of one guinea (£1.10p) a week. Dr Reginald Langdon Down still visited especiallyon sports days, but had no authority. Parts of the estate were sold off and single storey unitswere built more suited to the residents’ needs, with large open dormitories and more accessible facilities. Tony moved to Elm House, where he stayed until it was closed down. More seriously disabled residents started being admitted to whom Tony became very attached. This showed a very compassionate side to his nature.

Tony fractured his left ankle leaving him with a deformed leg and restricting his mobility consistent with his childhood talipes. When determined, as he could be, he would walk long distances in spite of it. He loved being taken out for trips locally to Bushy Park or along the riverside, being very aware, in spite of no speech except the odd word like “car” and “yes”. He attended the workshop doing manual tasks and joined in musical events, such as dancing,always brightening up with a smile. He had a voracious appetite, especially for anything withchocolate. His health remained largely unaffected during these years and he was popularwith the staff due to his friendly and affectionate manner. But his ability to speak and learnskills never improved in spite of the help he was given.

When Care in the Community was established by 1997, Normansfield closed down and theresidents were moved out into homes locally, each converted to receive only a limited numberof about 4-6 residents. Tony went first to Kneller Road, Whitton, for 18 months and finallyto 52, Lion Road, Twickenham. He had his own room for the first time, with his bed, furnitureand personal belongings and a privacy which he had never known before. He respondedvery well to the closer contact with staff, therapists, activities and more freedom. His favouriteplace was to sit in his wheelchair in the hall and watch everyone moving about. He had anadvocate who took him out locally to the pub, the cinema and on trains. He was taken onholidays to Spain, Portugal, Brussels on Eurostar, and the Isle of Wight. This was very goodfor him and also the staff. His placid character made him popular with those around him.

The last few years of his life showed a steady deterioration in his mobility. His arms and legs became contracted, he developed a tremor and had epileptic fits which were controlled with medication. He became confined to a reclining wheelchair and required hoisting for whichspecial facilities were provided. This in turn led to difficulty in swallowing food and to chestinfections. It was one of these infections that required admission to hospital where, after twodays, he died peacefully in the presence of one of his carers.

The care which he received during all this time was outstanding. In particular the managerand staff at Lion Road, his many therapists, physiotherapist, occupational therapist, speech therapist and aroma therapist, who all gave him such personal care. One of his carers, Brenda Bridges, “B”, had looked after Tony for 15 years. He needed little attention from nurses and doctors.

His funeral was held locally and was well attended by staff, family, friends and residents in wheelchairs. It was a reflection of the fond regard so many people had felt for him and the way in which he coped with his disability.

Tony was buried at All Saints Church, Epping Upland, Essex, beside his mother and father.He left a legacy which included restoration of the ancient church clock there. The legacy also helped with the documentation of the extensive Langdon Down archive for future research. 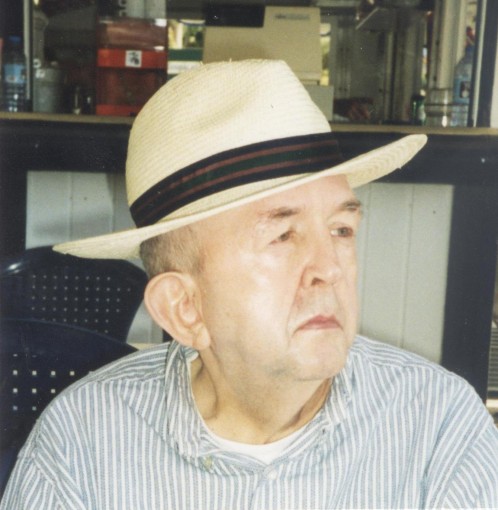