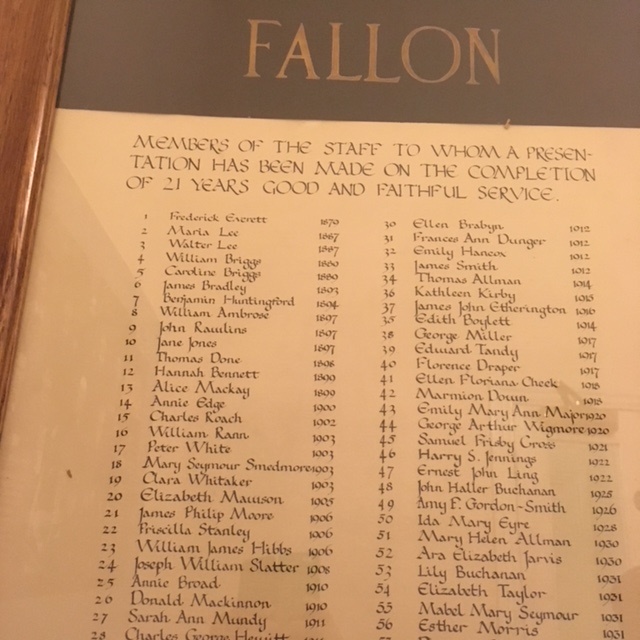 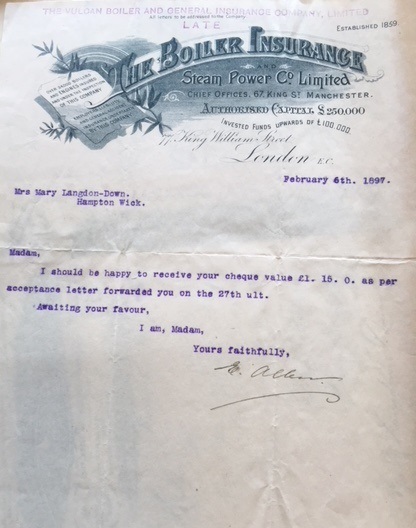 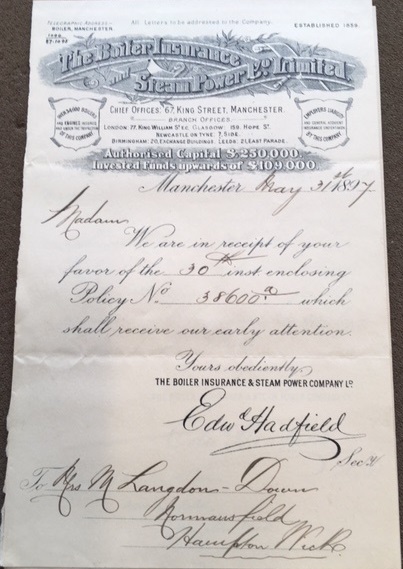 William Henry Briggs completed 21 years of employment at Normansfield in 1889 according to the Fallon Long Service Board. This means that William was one of the first to be employed by the Langdon Downs when they began the establishment in 1868.

The Census of 1871 shows that William was 25 years old and was a domestic servant, working as a house-man. We are not sure exactly what duties William undertook within this role, but probably they included attending to the residents, but he may have been employed to look after the Langdon Down family. But as a servant, not an officer, William would have had to live and work under certain conditions. A handbook entitled The Rules and Regulations to be Observed by The Servants of the Establishment found in the archives of the Langdon Down Museum provides evidence of these. Although dated 1908 we can surmise that the circumstances under which William worked were similar. Servants were employed on a month’s trial (rule 2) and paid quarterly (rule 4). Male servants had to wear dark-coloured clothing, could not go about the house without a coat or jacket and had to wear quiet-coloured neck ties and black boots, but no hat or cap indoors (rule 7). Servants had to rise at 6a.m. and were fined if they rose earlier without permission (rule 10) They had to start work at 6.30a.m. (rule 11) and retire at 10.15p.m. so the gas light could be turned down or extinguished at 10.30p.m. (rule 16). According to rule 36 male servants were not allowed in the kitchen, scullery, south wing, servants’ hall, north pavilion, or north wing roof without permission except in the discharge of their duties. No servant was to bring beer, wine or spirits on to the premises or out of the club (rule 66). There were 100 rules!

According to the 1861 census William, was born in the civil parish of Newington St Mary and the ecclesiastical parish of Walworth St Peter. Then, 16 years old, (making his birth year 1844/5 which is verified by the 1851 census), William lived in Lambeth with his father, Samuel, who was a shoe maker, and Mary, his mother. William’s occupation was a book seller. At this stage William had a younger brother, George (aged 8) and four younger sisters, Mary (14), Maria (12) and Susan (6) who were all scholars. A younger sister, Jane (2) completed the family.

No evidence has been found of William’s application for work at Normansfield, so we are not sure why he made the move from his family home, then at 2, Richmond Street, to Normansfield.

The census of 1881 shows that William (now 36) was an engineer at Normansfield. Also, that he was married to Caroline (35), who worked at Normansfield as a housekeeper. At this stage, they had two young daughters, Caroline, aged three and Lillian, aged one, who were both born in Teddington.

The records of St Mary’s church in Teddington show William and Caroline were married on 20th March, 1875. William’s occupation was an engineer. No profession was mentioned for Caroline, but the marriage record showed that her maiden name was Pennyfather and her father, Richard Whittenbury Pennyfather was a bailiff.

A return to the 1871 census showed that a Caroline Pennyfeather worked at Normansfield as a parlour maid. While the spellings of the surname on the 1871 census and marriage record differ, we can assume that it is the same Caroline, and so like William, she was one of the first servants employed at Normansfield when it was established. This is verified on the Fallon Long Service Board. Whether William and Caroline met before they joined Normansfield or met while they were in service together we cannot be sure, but it is a wonderful love story!

William’s occupation remained as an engineer, according to the census of 1891, although the 1901 census specifies that he is a furnace stoker. By the census of 1911 William’s job is classified as a stationary engineer.

Further research shows a stationary engineer is a person who looks after stationary equipment and machinery. At the London Metropolitan Archives (LMA), a photograph was found showing four workers at Normansfield standing by a Galloway boiler, a piece of stationary machinery, such as William would have worked with. The boiler was made by Galloway (originally W. and J. Galloway and sons). Galloway was a Manchester-based firm, established by brothers John and William in 1835, which provided steam engines and industrial boilers across Great Britain and also world-wide. The introduction of electric power was a factor which caused them to cease trading.

William’s work in stoking, maintaining and working on the Galloway boiler at Normansfield was important in providing hot water and heating for the Langdon Down family and also the growing number of residents and staff, but also for the many necessary jobs that needed to be undertaken, such as the work in the laundry.

The importance of this Galloway boiler was recognised by Mrs Langdon Down. Documentary evidence from the archives at LMA show she paid £1.15s.0d to insure the boiler with The Boiler Insurance and Steam Power Co Limited, another Manchester-based firm.

William and Caroline had four children living by the time of the 1911 census, although, unfortunately two of their six children had died. Based on the information in various censuses we know that the following children were born to the Briggs family: Caroline (born 1878), Lilian Mary (born 1880), Herbert Samuel (born 1882), Ethel (born 1885) and Charles Whittenbury (born 1889).  A lucky find at the LMA was a photograph, sadly undated, of William and Caroline Briggs with five of their children.

According to the 1911 census, William and Caroline lived in South Villa, Normansfield, and probably remained in that accommodation until their deaths.  As two of the first members of staff they gave a life of service to the Langdon Downs and in return were provided with somewhere to live, jobs for life and a close community in which to raise their family. William died aged 84 in 1928, having been at Normansfield for sixty years. Caroline died before him in 1922 after being at Normansfield for 54 years.