The first electric lamps in the UK were made in 1878 by Joseph Swan and his house in Gateshead had the world’s first working light bulbs installed. Godalming in Surrey claimed to be the first town in England to have public street lighting in 1881. The electricity supply was generated by a local and unreliable water- driven turbine located in a leather tanning factory. The first power station in London was at Deptford built by the London Electric Supply Company in 1887 but its supply also was very unreliable and suffered many breakdowns. Kingston had its own electricity generator in 1893 but this did not supply properties across the River Thames here in Middlesex. It was not until 1900 that the Twickenham council (prompted by the intention of the London United Tramways to run electric trams through Twickenham) agreed to plans for the building of an electricity power station near the railway which would eventually supply this area at Hampton Wick.

Electricity was first supplied in July 1902 by the Twickenham and Teddington Electric Supply Company Ltd for just 221 consumers with a total of 6,7000 lamps. The electric lighting for the public streets was given the first priority followed by domestic premises. Those few cottages near the power station were some of the first. The initial spread of electricity was slow as it was much more expensive than gas that the ordinary person could not afford it. Also there some who thought “it would never catch on”! It wasn’t until 1931 that the Twickenham BC approved the conversion of all their remaining street gas lamps to electric.

In the 19th Century only the main roads around Normansfield and Hampton Wick were lit with gas lamps which were provided by the Hampton Court Gas Company. The lamps were lit (by a lamplighter) between sunset and sunrise but only during the six winter months. Even in winter the lamps were not lit for five nights at about the full moon as the light was considered good enough to light the streets. In summer, most people were expected to be home by dusk. The horizontal bar approximately two thirds up the post was to provide a secure rest for the lamplighters’ ladder.

There had been many complaints to the local council about the poor quality of the street lighting. The brightest gas lamps provided less light than a modern 25-watt incandescent lamp.

In 1903, although many of the local councillors where concerned about the cost, the Teddington Borough Council authorised the Twickenham and Teddington Electric Supply Company to provide local electric street lighting in the area.

Normansfield must have had electric wiring installed in about 1911 as regular payments to the local supply company began from this time. The Normansfield Ledgers at the LMA show these payments were on average £53 per quarter and 16s for meter rental. £53 in 1915 was equivalent to £3,126 in 2018. Note that the electricity supply company was promoting their “Only Absolutely Healthy Light”!

The supply company did not provide a repair service, so two local self-employed Electrical Engineers had contracts to carry out repairs at Normansfield, both of whom lived in Surbiton.

The first was F.R. Stanford of Brighton Road, Surbiton who charged for two repairs per his contract – in May and in September 1912. He was Francis Richard Stanford who was 54 in 1912 and described his occupation as an “Electrical Engineer”. He died in 1915 in Kingston.

The other electrical company was L. Fellows, also from Brighton Road, Surbiton. This business was owned by Howard Edward Fellows, who was 29 in 1912 and the company was named after his wife, Louisa Fellows. Howard described his occupation in the 1911 Census as an “Electric Lighting Contractor”. In 1915 he enlisted in the Royal Navy as an Electrical Artificer 2nd Class and he survived the Great War.

In 1916 and 1918 the ledgers show payments to Offer & Sons, 8, Church Street, Kingston. The Offer family were a well-known family in Kingston at this time. Two brothers, James and Harry Offer, who were originally both gas fitters/plumbers (like their father) and shared their business premises in Church Street with a haberdashers. However, in the 1911 Census Harry Offer described his occupation as “Electrician Fitting Apparatus” so we can assume that he would have carried out the repair work at Normansfield. This work included the supply of lamps and telephone apparatus costing from 10s to £2 10s 9d in 1916 and then in 1918 telephone repairs costing £2 13s 0d. As this work was carried-out during the 1st World War it would suggest that Harry Offer had not been conscripted into the armed services. In fact, one of the “Reserved Occupations” listed in The Times in 1915 was “an electrician employed in Public Utility Services”, which could have applied to him.

Wiring the Normansfield properties: The major cost for the work of converting the existing gas lamps to electrical lighting was not found within the LMA ledger files. To encourage domestic lighting, the supply company offered the installation of the house wiring “Free of all initial cost” for a rental charge. This may have been the case at Normansfield. Some electricians were known to use the existing gas pipes to enclose the electricity cables and so reduce the costs.

Light fittings: The introduction of electric lamps in the home allowed the creation of a whole new range of designs of light fittings.

Reliability of supplies and lamps: In these early days of the electricity supply industry, the reliability of the lighting was often an issue. The early incandescent lamps were made using a very fragile metal filament which easily failed after just a few hours, hence the continued need for replacements, repairs and indeed candles!

Arrival of electricity at Normansfield must have been quite a major event for both residents and staff. Gone were the old “unhealthy” gas lamps and as a notice for Edison Electric Light says “simply turn the key (or switch) by the door”. In 1911, Normansfield was one of the earliest of the consumers of electricity in the area of Hampton Wick.

As Normansfield was a business and as well as an institution, it is thought that the Langdon Down family considered electric lighting for their residents, who were from mainly wealthy families, a worthwhile investment. In June 1915 plans for the building and installation of an electric passenger lift were provided by Archibald Smith & Stevens, Abbey Works, in Northampton.

The bright new lights in Normansfield must have been welcoming for both residents and the staff alike.

Among the collection of bills were found four payments to the St. Marylebone Borough Council made by Dr. Reginald Langdon-Down in 1925. 47, Welbeck Street was the London consulting rooms used by both Doctor Langdon Downs. It is now the Marylebone Hotel. 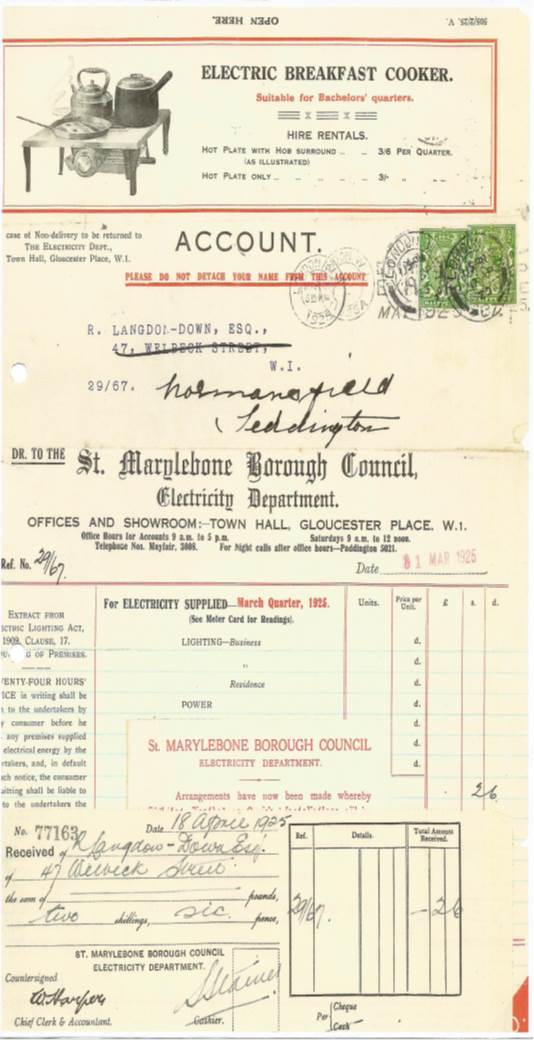 This is one example dated Mach 1925 for a payment of 2s 6d, which was possibly for a meter rental. Unusually the St. Marylebone Borough Council had an electrical showroom at their Town Hall in Gloucester Place, London which advertised a range of electrical appliances for the home. At the top of this invoice is an appliance described as an “Electrical Breakfast Cooker” – “Suitable for Bachelor’s Quarters”!