While at Earlswood, built to aid the “respectable poor” and which was over-subscribed, John Langdon Down clearly discerned a need for a similar establishment to cater for the wealthier elements of society. In 1868, he left Earlswood and purchased the White House with 5 acres of ground in Teddington (later re-named Normansfield House) with the aim of taking in fee-paying patients presenting a degree of mental deficiency, from families of good social standing. His success in attracting patients led to rapid expansion. Initially, he extended the main house with a south wing followed soon after by a north wing. The purchase of additional land and properties and the construction of ancillary buildings further extended Normansfield so that, by 1888 it comprised 40 acres stretching all the way to the River Thames and had become largely self-sufficient with its own farm and a theatre.

Latterly, most patients were housed in the main building with women and children in one wing and men in the other. Some higher grade patients lived in separate villas: men in “Trematon” and women in “Conifers”.

All admissions, discharges and deaths from 1868 until early 1914 were recorded in standard registers printed under licence and used by many institutions, including those for the insane. While it was recognised that Mental deficiency was not a form of insanity, entries in the Normansfield admission registers often attempted to attribute a “cause of insanity” (usually in a parent), presumably to explain the patient’s deficiency. The registers were also used to record the incidence of epilepsy, a condition suffered by almost a quarter of those when admitted. More than 98 per cent of admissions were recorded as having a mental disorder of idiocy (35%) or imbecility (65%). This seems improbable as some of the patients suffered from physical rather than mental problems and it is likely that some patients suffered from lesser deficiency or behavioural conditions that would not warrant such a classification. If this is so, then less importance has to be attached to the initial classification which may be misleading.

A wide range of “bodily disorders” were also recorded at the time of admission. Subsequent requirements in this respect were recorded in the Medical Visitation Book maintained until 1887 indicating a continuing need for medical treatment on a regular basis. Such entries, coupled with the register of deaths, also show that the patients were subject to periodic outbreaks of scarlet fever, measles and influenza and were particularly vulnerable to pulmonary disease and complications arising from epilepsy.

In June 1879 there were 76 male and 35 female patients and Dr Down expressed his belief that this represented a normal proportionate distribution of the sexes in the idiot population. Over the whole period of the study the percentage of male to female patients was 62% to 38%. The percentages of deaths were the same and the percentages of discharges were very similar. The ratio of admissions of those under 16 years of age to those 16 and over was almost 2:1.

It is interesting that in all the registers for the period, there are only a handful of mentions of mongolism and then only as an appended note, usually following death of the patient. This was surprising given the Langdon Down family’s particular interest in this condition. It may well be the case that more attention was accorded in individual patient case notes beyond the scope of this study. It is also possible that mongolism was not considered directly relevant to the assessment of the level mental deficiency as it could display a range of severity.

It is interesting to note that the total number of patients in Normansfield progressively increased to a maximum in 1894, shortly before the death of John Langdon Down. Numbers then held fairly static until the death of his wife, Mary, in 1901 following which there was a further slight decline when his son, Reginald took over. 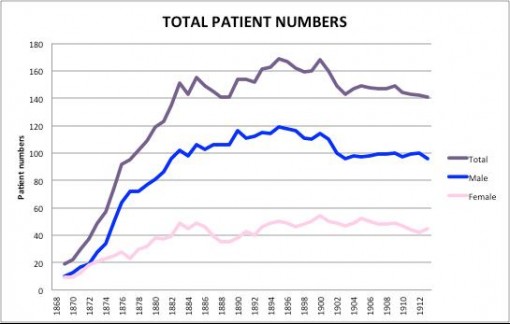 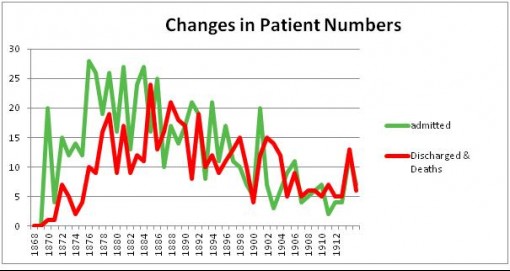 There is a common perception today that most patients admitted to such places as Normansfield in the latter half of the 19th century and early in the 20th century were being hidden away from public view and incarcerated for life. In fact, almost forty per cent of patients stayed for less than 2 years with only around thirty per cent remaining for more than 10 years. There is a large volume of correspondence in the LMA archive between Mary Langdon Down and the families of patients testifying to the strong interest many relatives and guardians took in the patients, many of whom undertook regular home visits. 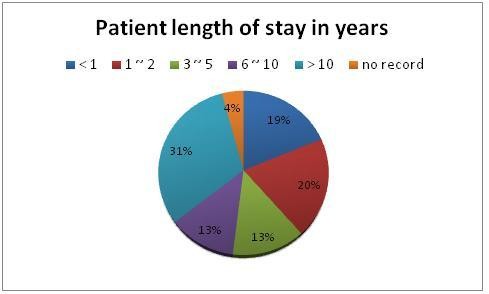 In the registers of discharges and deaths, one of three categories is assigned when a patient is discharged; ‘recovered’, ‘relieved’ or ‘not improved’. The first and third of these categories seem to be self-explanatory. What is meant by ‘relieved’ is not clear but must range from almost recovered to only slight improvement and appears to be a convenient euphemism as it covered nearly 80 per cent of those discharged. As most forms of mental deficiency could not be reversed, any improvement in ability, temperament or behaviour following treatment could, with justification, be considered to have relieved the patient’s condition. Although only a small percentage was discharged as recovered, it does suggest that those patients could not have been in the imbecile category when admitted.