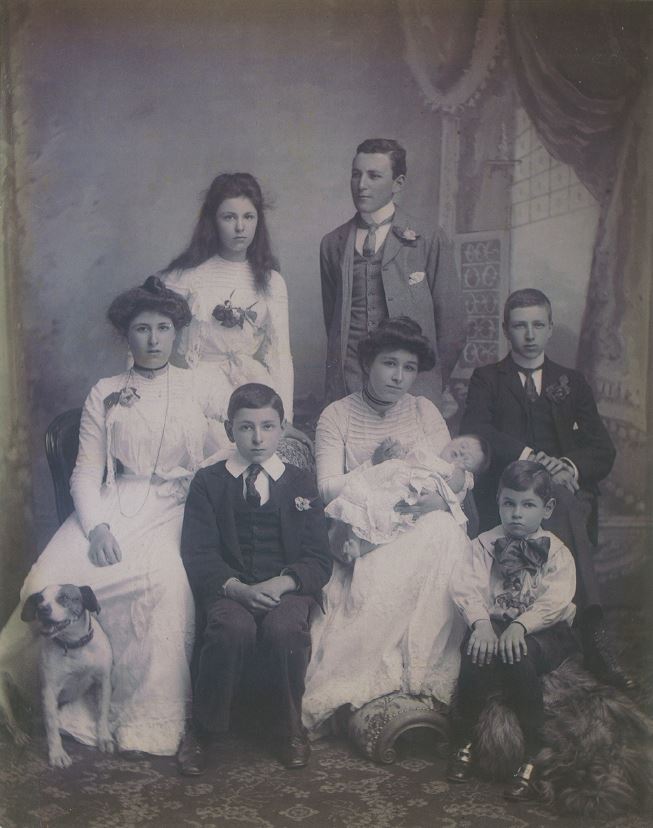 A photo of Betty as a baby with her brothers and sisters. In this 1901 photograph, the baby clearly has Down’s syndrome.  It is my 20 year-old grandmother holding her.

My Great Aunt Betty was the youngest child of Michael and Netta Green. Her eldest sister (my grandmother) was already 20 when Betty was born.

Betty, who had Down’s syndrome, had 3 sisters and 4 brothers.

I never met Betty, but was always aware of her existence – I was 12 when she died. My grandmother visited her sister weekly at Normansfield on Wednesday afternoons. Betty’s sister-in-law or other relatives visited when Granny was away. Three of my young cousins and I often asked to accompany Granny to Normansfield but this was always firmly refused.

From an early age I realised that the family were reluctant to talk about Betty. As a teenager, I once asked a normally talkative cousin about her. She snapped: “She was unsighted” and then became silent. A minute or so later she said “Betty was some sort of supervisor in a workshop at Normansfield. I think it was a stained glass workshop” – and that was it. In adulthood, I asked an uncle about Betty and elicited slightly more information. However, he told me about a “pedigree” somewhere in his flat that might fill some gaps. I found it after he died.

Betty was born with cataracts in both eyes. By the time she was 11, she had had her cataracts and tonsils removed. This showed considerable determination on the part of my great grandmother. Surgery would have been expensive and Betty would have needed close supervision and care to recover from the operations.

Betty’s oldest sister, my grandmother, would ‘take a turn’ looking after Betty, to give her mother some rest – possibly at night.

My great grandmother firmly believed that Betty would develop from playing with other children. Cousins were invited to the family home to play with her regularly. When she came home on holiday from Normansfield, my great grandmother insisted Betty’s much younger nieces and nephews played with her. These small children did not want to share their toys with “a big person”.

As a young child, my easy-going uncle was distressed and embarrassed by Betty’s loud public tantrums and seizures when she would wet or soil herself. Like other women in the family, she had a strong personality. She tended to overshadow her mild-mannered brother who was only 5 years older than her. I was told that this was the reason for her being sent to Normansfield at the age of 11.

Betty was admitted in 1911 as a private patient. Her parents told her that she would leave the institution when her older sister married. However, my grandparents married in 1913 but did not take Betty home with them. Later I learned that Granny always felt guilty about this and was frightened she would be asked to discharge Betty to live with her.

In February 1912 my great-grandmother, Netta, began completing a Family Record for the Eugenics Education Society, which she joined. She wrote of Betty:

“Complete cataract at birth due to non absorbtion (sic) of prenatal membrane. Very backward in walking and speech. Not normal mentally but improving greatly under tuition. Very musical. Born during Boer war, 5 months after death of her mother’s brother in the war”.

Most of what I know about Betty comes from this document, which contains some “multiple choice” questions.

She had light brown hair

She had yellow blue/grey eyes and “blond” skin.

Great Granny Netta rated Betty as having poor general mental ability, but she had exceptional ability when it came to music. Betty had perfect pitch. She was always singing and had taught herself to play nursery rhythms on the piano. When her big sister sang to Betty, Betty would protest or cry if her sister sang in the wrong key.

Her vision was described as imperfect, with her needing to wear glasses at all times. (She would have been impossibly long-sighted without glasses and unable to focus on anything near).

She had “strong hearing”, but Netta does not say when Betty started speaking on the document.

Out of a list of “personality types”, Great Granny Netta describes Betty’s personality as “choleric”.

My uncle had told me about Betty’s seizures – no-one else had mentioned them. Her mother did not record them on the Eugenics Education Society’s document – but then there was nothing in the multiple choice questions to prompt her about this. Her mother, Great Granny Netta, continued to add to the document for many years although I do not know if she sent the Society new information. I wonder if the seizures were omitted because of a possible “stain” on the family.

Betty died at Normansfield on 14th January 1961. Her death certificate, signed by N Langdon Down, gives the cause of death as
• Bronchial pneumonia
• Bronchitis
• Mongolism

She was buried in parents’ grave.

I wish I had met Betty and had got to know her as a personality. Some of my cousins feel the same.