You are here: Home » Projects » Exceptional and Extraordinary 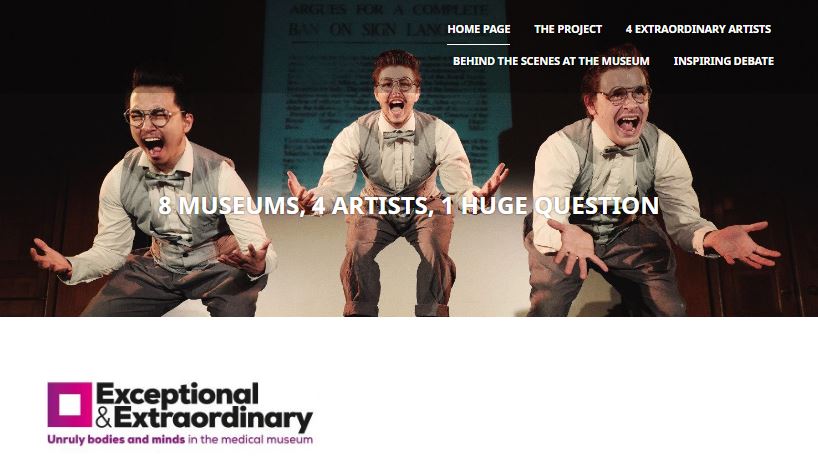 Exceptional & Extraordinary: Unruly Minds and Bodies in the Museum

Why are some lives more highly valued than others?

Since humans first appeared on Earth, no two have ever been the same. Yet somewhere along the way, certain bodies and minds came to be highly valued whilst others became viewed as problematic; as deviant and unruly, deficient and requiring adjustment towards a perceived idealised norm.

Exceptional & Extraordinary invited four artists to explore behind the scenes of eight of the UK’s renowned medical museums and – in collaboration with experts in medical history, disability and museums – to produce a series of thought-provoking new commissions that examine our attitudes towards difference with the aim of stimulating debate around the implications of a society that values some lives more than others.

Initiated and led by the Research Centre for Museums and Galleries (RCMG), University of Leicester, Exceptional & Extraordinary was funded by the Wellcome Trust and Arts Council England. 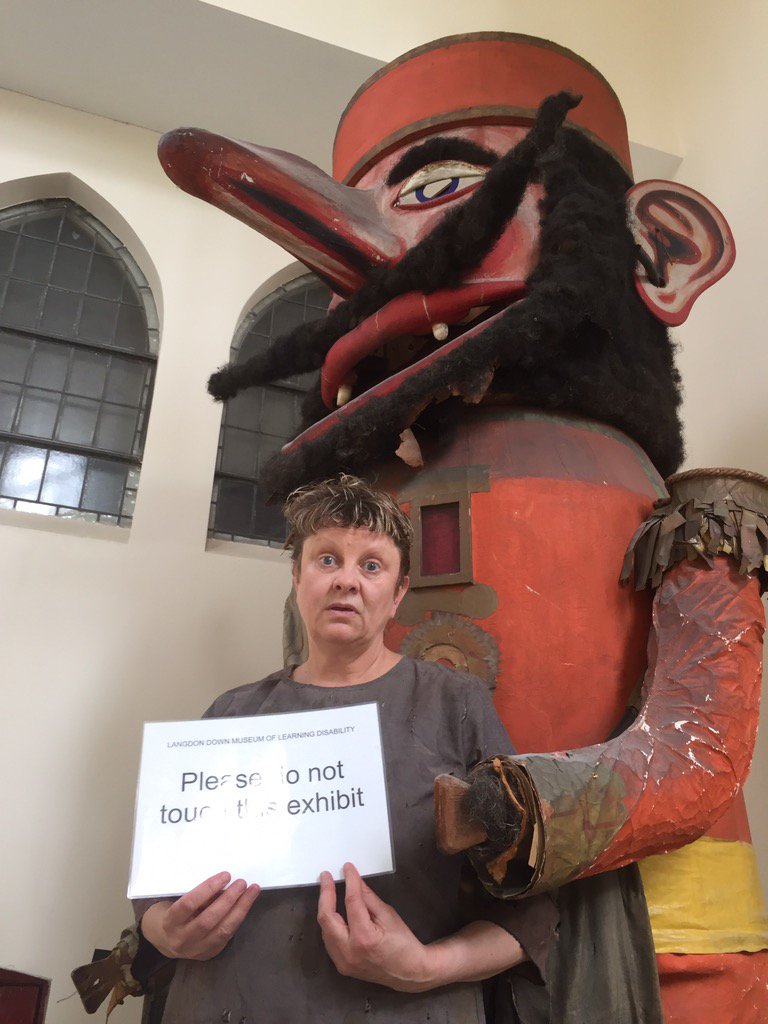 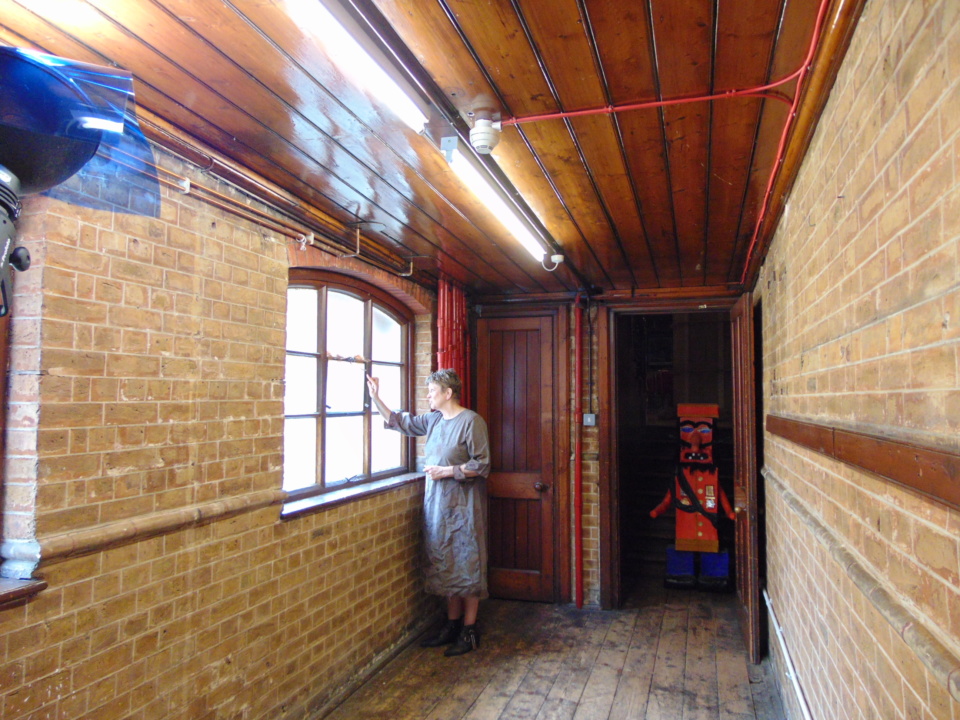 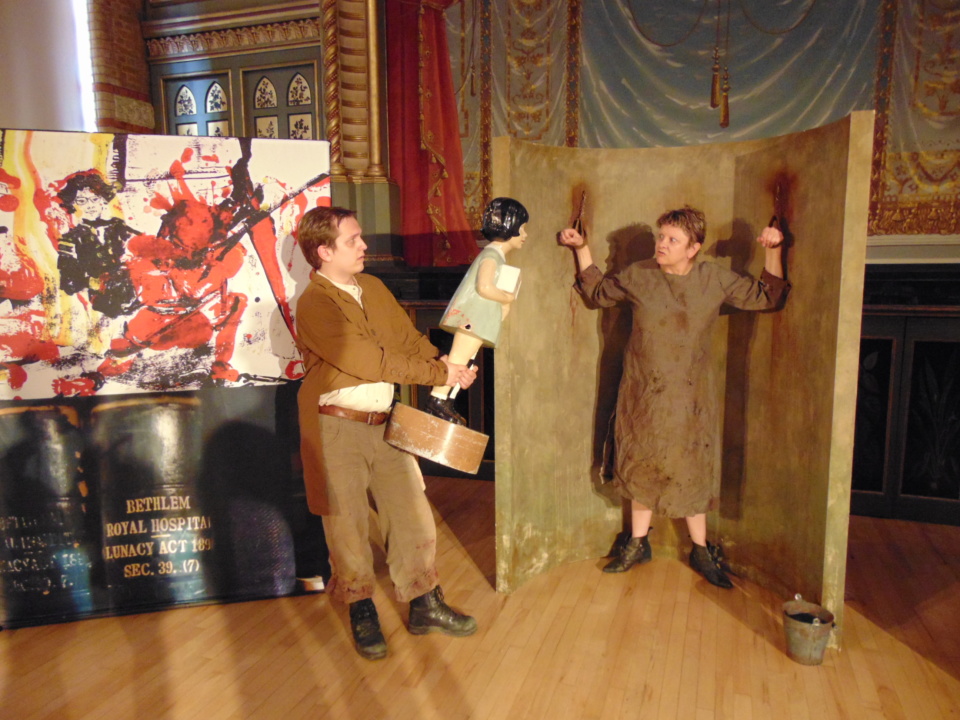 The making of Hold the Hearse! – in conversation with Julie McNamara

The Big Issue in the North 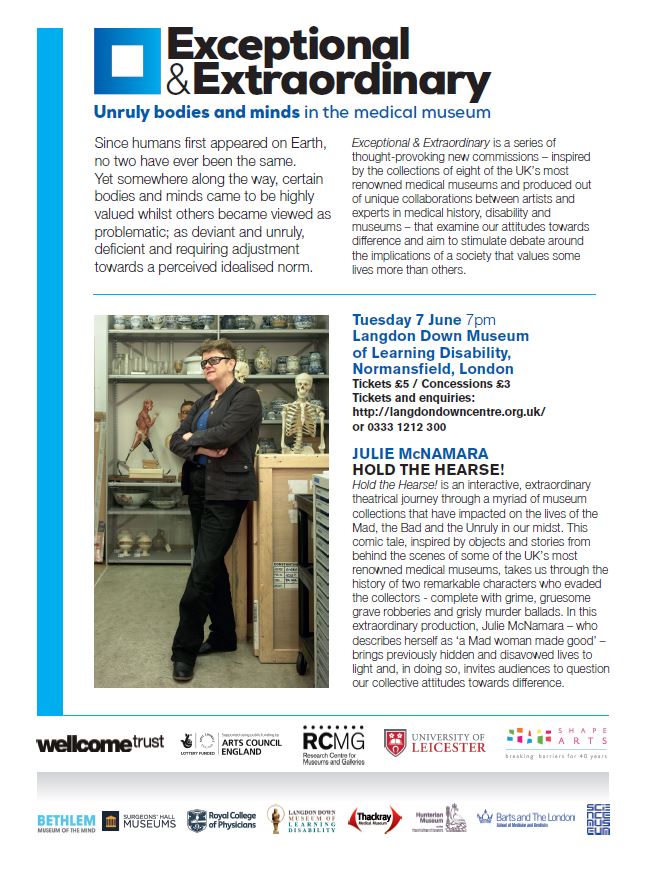 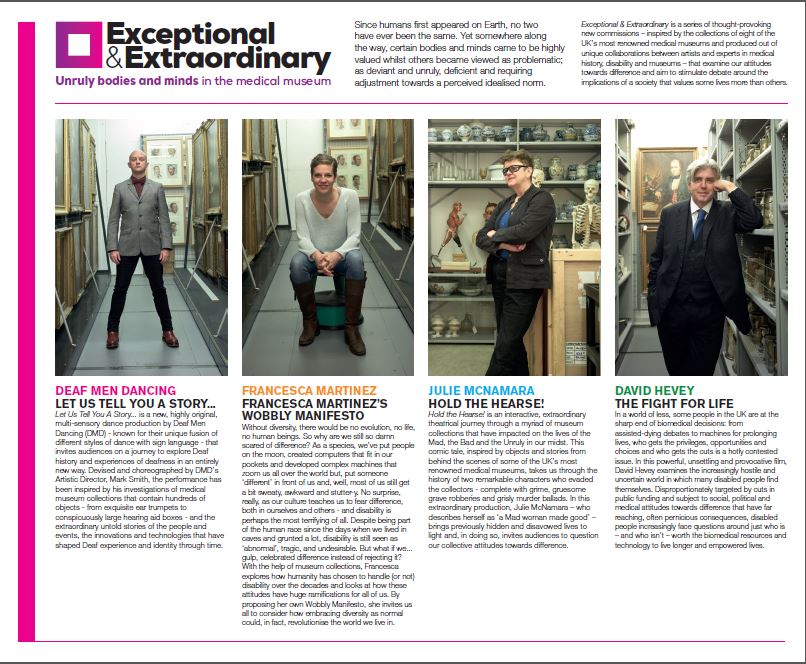 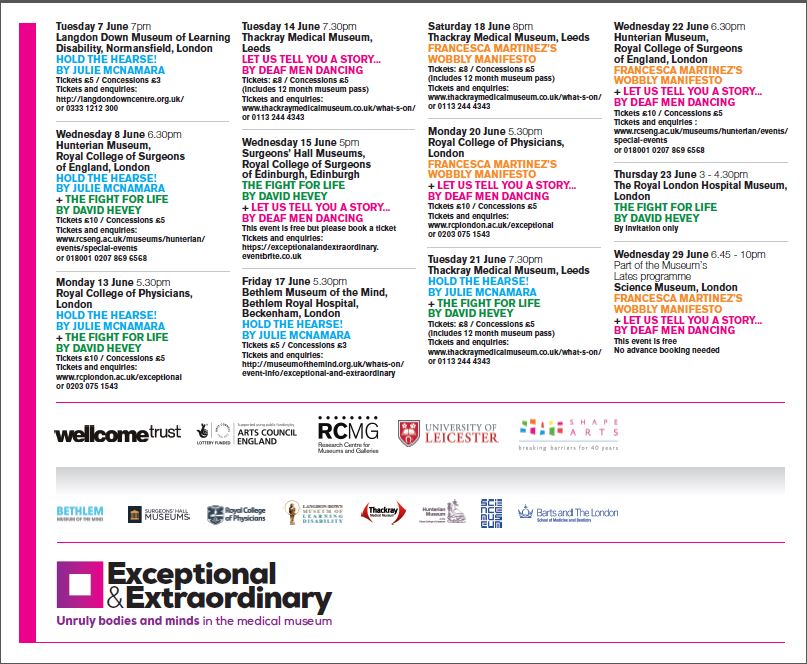 UNRULY BODIES AND MINDS IN THE MEDICAL MUSEUM

Since humans first appeared on earth no two have ever been the same. Yet somewhere along the way, certain bodies and minds came to be highly valued whilst others became viewed as problematic: as deviant and unruly, deficient and requiring adjustment towards a perceived idealised norm.

Following Mat Fraser’s astonishing and award-winning commission Cabinet of Curiosities that toured UK museums in 2015, Exceptional & Extraordinary invites four artists to explore behind the scenes of eight of the UK’s most renowned medical museums. In collaboration with experts in medical history, disability and museums – they are currently producing a series of thought provoking new commissions that examine our attitudes towards difference and aim to stimulate debate around the implications of a society that values some lives more than others. The subsequent ticketed performances and film will tour throughout June 2016 to all eight partner museums, with different groupings of the commissions so that every performance is unique to each venue and with many of the performances supported by after-show discussion panels with invited experts as well as opportunities to view and handle some of the objects that have inspired the artists.

Funded through a Large Arts Award by the Wellcome Trust and a Grants for the Arts award from Arts Council England, Exceptional & Extraordinary is an ambitious project that aims to engage visitors to all the partner museums, professionals in the field of biomedicine and the broader public in a reassessment of widely held assumptions surrounding physical and mental difference, disability and contemporary (often negative and discriminatory) attitudes towards disabled people.

The commissions will offer new ways of seeing that will be used to question and stimulate public, biomedical professional and media debate around the social, cultural and ethical implications of medicalised ways of understanding difference that pervade biomedical professional practice as well as shape broader public and societal attitudes towards disability and disabled people.

For further information, a range of images and interviews please contact Catharine Braithwaite on 07947 644 110 or cat@we-r-lethal.com

More about the commissioned artists:

Unafraid of controversial subjects, David Hevey is one of the UK’s most original media professionals working out of the UK today. Internationally recognized, the Huffington Post recently described David Hevey as ‘one of the leading documentary markers of a generation’.  His output is prolific and he creatively directs across television, film, digital and other forms. His premise is simple – good stories, well told, with a purpose – to create impactful, compelling reflections about the way we live now.  David uses journalism, performance, documentary, sung-narration and other devices to take the viewer deeper into understanding and feeling stories about our world now. His work is characterised by his inclusive approach, including engagement of and working with people and stories from the margins. He wrote The Creatures Time Forgot: Photography & Disability Representation (Routledge), produced and directed the BBC series, The Disabled Century (2012) and has directed three BBC TV Modern Times documentaries. Visit www.davidhevey.com

Francesca Martinez is an award-winning wobbly comedian, actress, writer and campaigner. Since winning the Open Mic Award at the Edinburgh Festival in 2000, she has toured the world and appeared in TV shows such as ‘Live At The Apollo’, ‘The Jonathan Ross Show’ and ‘Extras’. Her first book ‘What The **** Is Normal’ was published in 2014 to critical acclaim and was nominated for two national book awards. She has recently supported Frankie Boyle on his UK tour, and is currently working on several BBC and theatre commissions. An active campaigner, she is also involved with the People’s Assembly Against Austerity, the War On Welfare petition, and has helped organise the UK-wide JC4PM Tour in support of Jeremy Corbyn. Visit Francesca Martinez

Julie McNamara is an award winning playwright and theatre maker. Her work investigates the extraordinary stories of voices hidden in the margins of our communities. Artistic Director of Vital Xposure, her work is renowned for its’ strong narratives and bold visual aesthetic that places access at the heart of the story. Recent work has included the internationally acclaimed: ‘Let Me Stay’, a unique story of living well with dementia and a love letter to the artist’s mother.  An activist in Disability Arts and vociferous spokeswoman for mental health system survivors, she describes herself as ‘A Mad Woman made good’. Visit Vitalxposure

Research for Museums and Galleries (RCMG) has extensive experience of researching disability history and museums through a series of projects (funded by the AHRC’s Innovation Awards schemes, NESTA, Heritage Lottery Fund, Wellcome Trust, Arts Council England) carried out over the last 15 years. RCMG was recognized in the most recent UK wide Research Excellence Framework (2014) as producing research that was world leading in its impact beyond the academy, shaping professional thinking and practice and tackling prejudice and discrimination towards disabled people. In 2014, a research project led by Jocelyn Dodd and Richard Sandell culminated in the performance, Cabinet of Curiosities by Mat Fraser which as well being critically acclaimed also received the Observer Ethical Award for Arts and Culture.

This project brings together organisations with track records in innovative public engagement and an exciting blend of expertise in medical collections, the history of medicine, disability history and representations of disability within public history settings, museum ethics and public engagement with scientific and social issues. The Hunterian Museum at the Royal College of Surgeons (RCS); the Science Museum; the Royal College of Physicians (RCP), Thackray Museum, Leeds; Royal London Hospital Museum and Archives; Surgeons’ Hall at the Royal College of Surgeons of Edinburgh; Museum of the Mind; Langdon Down Museum of Learning Disability all hold extraordinary collections and bring rich expertise in medical history, community health, history of disability as well as a commitment to pursuing new ways of engaging audiences in debating biomedical science through the arts.

The Wellcome Trust is a global charitable foundation dedicated to improving health. They support bright minds in science, the humanities and the social sciences, as well as education, public engagement and the application of research to medicine.

Arts Council England champions, develops and invests in artistic and cultural experiences that enrich people’s lives. It support a range of activities across the arts, museums and libraries – from theatre to digital art, reading to dance, music to literature, and crafts to collections. Great art and culture inspires us, brings us together and teaches us about ourselves and the world around us. In short, it makes life better.

We are part of the collaborative project, Exceptional & Extraordinary, initiated and led by the Research Centre for Museums and Galleries at the University of Leicester. 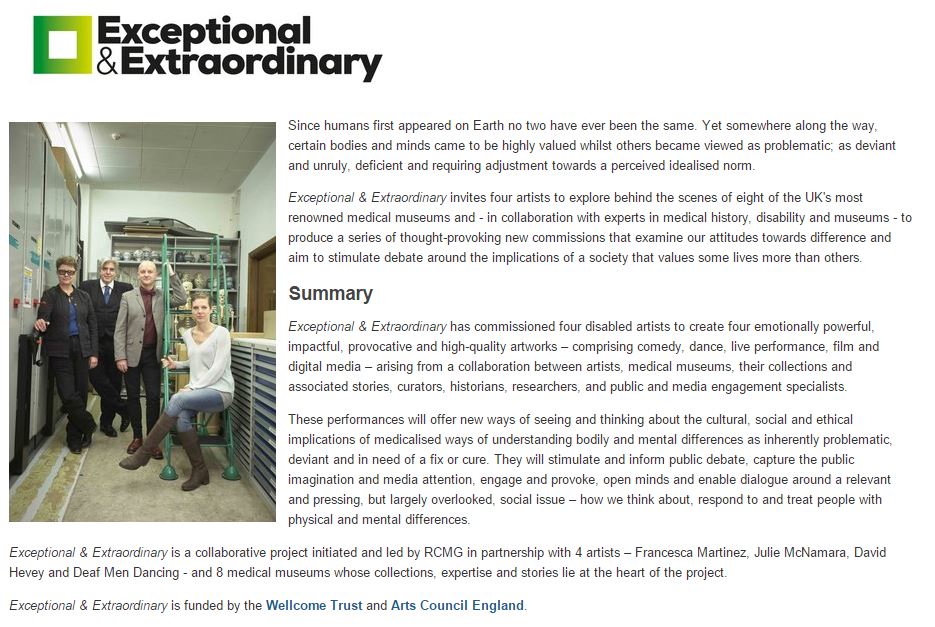