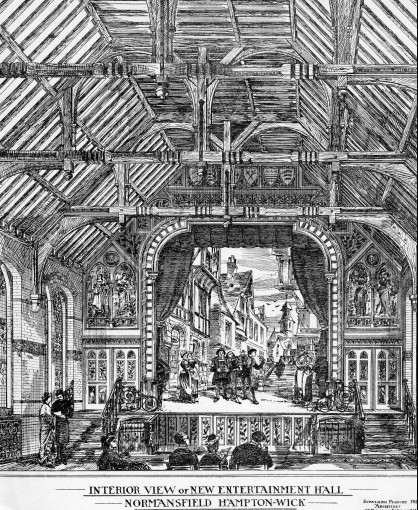 This is a Grade II* listed Victorian theatre.  It has the largest collection of Victorian scenery to be fully restored in the UK. The stage itself is only one of two theatres with the original Victorian side flaps still in working order.

Both John and Mary Langdon Down had a great love of the theatre which they duly passed onto their future generations. The building of the theatre commenced in 1877 and was completed and opened in 1879 in the presence of the Earl of Devon. It was designed by the architect Rowland Plumbe. Multi-purpose halls, often with proscenium stages are found in all kinds of Victorian institutional building, but the Normansfield Theatre (or entertainment hall as it was called at the time) was uncommonly ambitious.  The provision of evening entertainment was a frequent event for the residents and staff, and dances were acknowledged to be healthy activities for residents of hospitals and asylums.

The theatre itself is surprisingly large, about 60 ft by 35 ft, and in John Langdon Down’s time, it would seat 300 (the capacity today is somewhat less at 150). The balcony with an ornamental iron front occupies the back of the hall (although this is not in use today for audiences). The magnificence of the hall is without doubt, the stage. The proscenium is a notable architectural ornament and to this day it isn’t known who designed it. We know that Rowland Plumbe did not design any other stage. It is believed that Plumbe designed the carcas, and then left the details  to an artistic decorator or scenic artist.

The proscenium paintings have no stylistic parallel in any London theatre.   Over the doors are four excellent life-size painted figures of Tragedy, Painting, Music and Comedy. The door panels at the front of the stage  are paintings of wild flowers and grasses. These have been attributed to Marianne North which work is exhibited at the North Gallery in Kew Gardens.

Within the theatre was a splendid gas sunburner in the roof, which was used to provide the auditorium with light, and to extract ventilation. The sunburner has been restored and remains in position today. On the walls around the theatre are paintings of 6 of the 21 original “Ruddigore” portrait panels showing costumes designed by “Wilhelm” for the Savoy theatre premiere in 1887. The portraits are life size and in their original use. They were framed with central swivels at the top and bottom, allowing actors to step out, bringing the picture to life.

The theatre itself was used for performances for residents and staff of Normansfield, and also for the Sunday service with Dr John Langdon Down.   The lectern which he used still exists today.