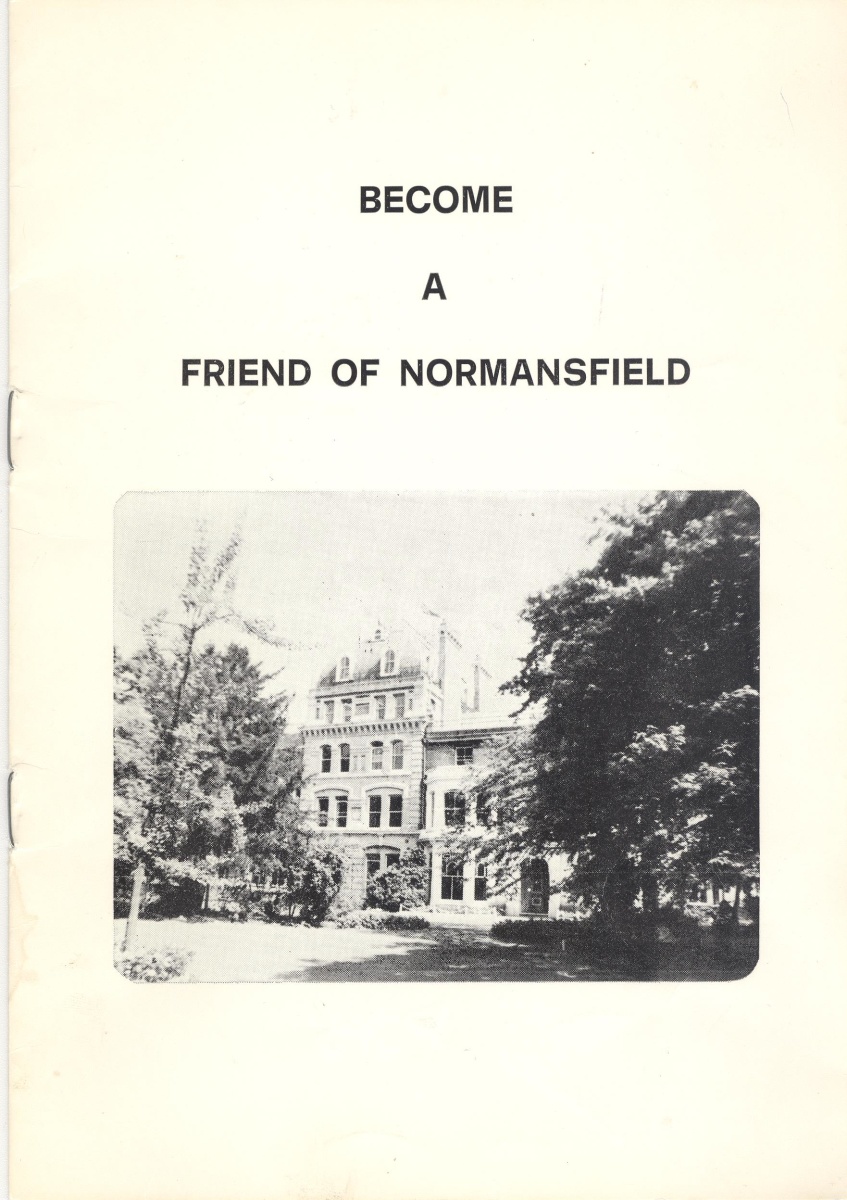 Normansfield was founded as a hospital for the mentally handicapped in 1868 by Dr John Haydon Langdon-Down (1828-1896) — the first doctor to identify Mongolism, now known as Down’s syndrome. Patients (adults and children) were looked after in small groups with provision for kindergarten training, teaching, occupational work, music and drama, dances, church services and holidays. In 1951, Normansfield was taken into the NHS, with Dr Norman Langdon-Down, grandson of the founder, as the first Medical Superintendent.

The term mental deficiency had been introduced and legalised in the Mental Deficiency Acts 1913-1927 and described a condition of “arrested or incomplete development of mind, whether arising from inherent causes, disease or injury”. It was replaced by the term sub-­normality in the Mental Health Act 1959, which in turn was replaced by the term mental handicap by relatives and professionals to describe people with a significant impairment of intellectual skills. The 1983 Mental Health Act defined mental impairment as “a state of arrested or incomplete development of mind, including significant impairment of intelligence and social functioning and associated with abnormally aggressive or seriously irresponsible behaviour”. The term learning disability was introduced by the Department of Health in 1991 to replace mental handicap and to change the emphasis in care and values by emphasising the learning potential and equality of citizenship and “a commitment to thinking of people with learning disabilities as individuals in their own right”. 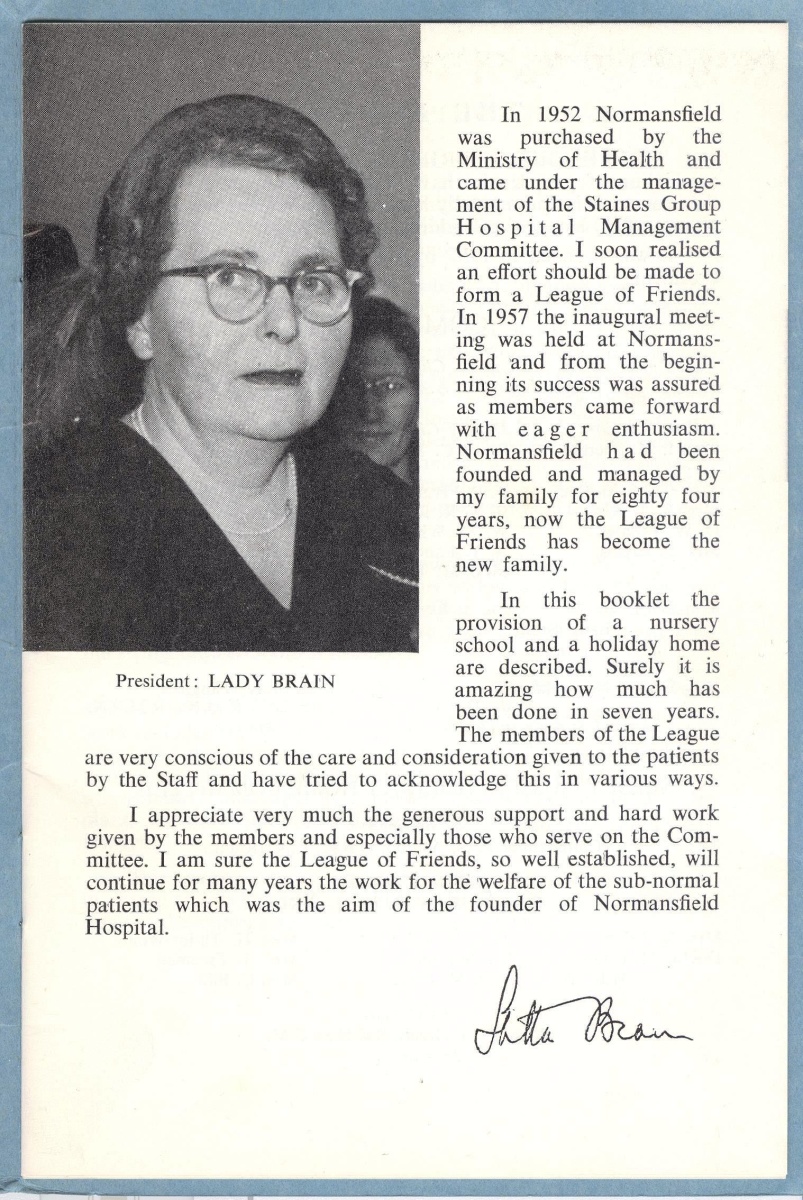 The League of Friends of Normansfield

The League of Friends of Normansfield was founded in 1957 by Col. Alex Symons MC and Lady Stella Brain (grand-daughter of the founder). The aim of the Friends was to raise  funds to help improve the lives of the residents and this led to the provision of the Stella Brain School, the Residents’ Club with the Friends’ Shop. the Hydrotherapy Pool (all within  the grounds of Normansfield) and the purchase of Bill House at Selsey as a holiday home. Originally intended only for residents of Normansfield, with the formation of the Community Nursing Service based at Normansfield they were made available to mentally handicapped people in the local area as well. 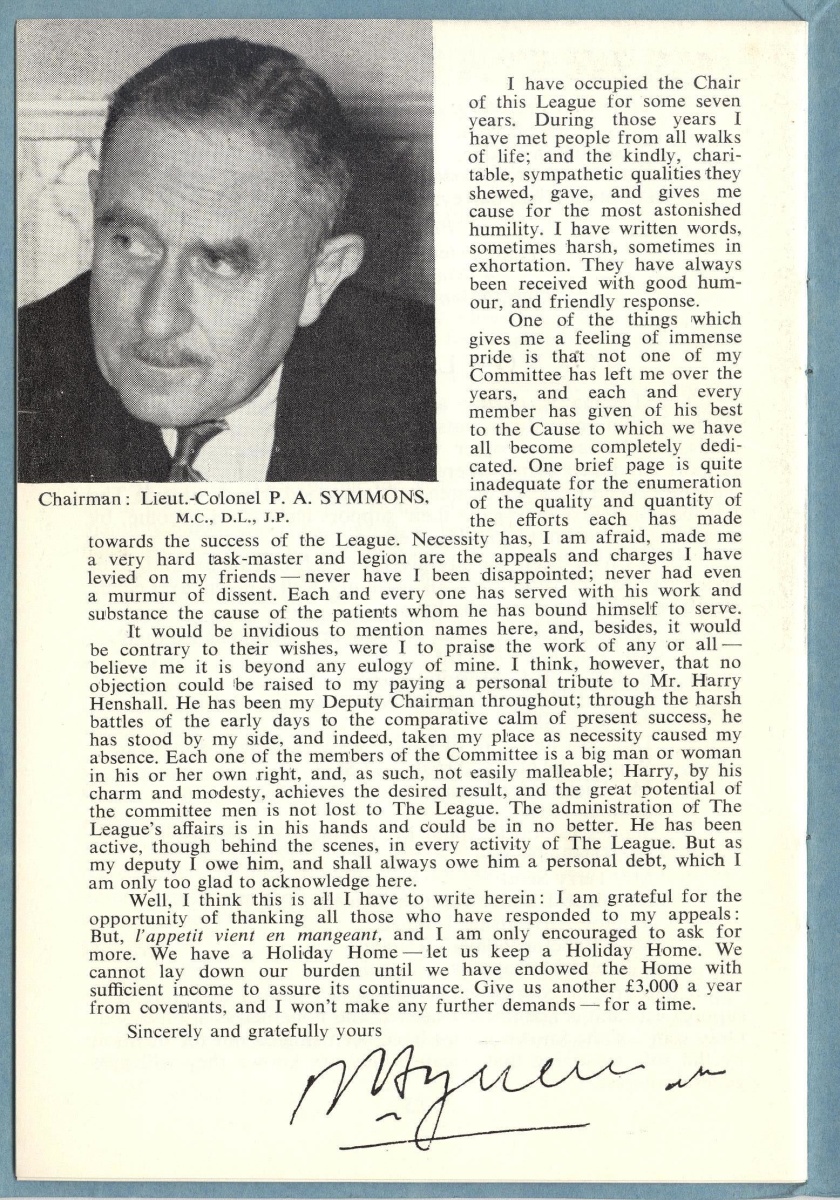 Another member of the Friends’ committee was Tony Langdon-Down, grandson of the founder and born at Normansfield on New Year’s Eve 1922. Tony died on 8 January 2010.

Brian and Elspeth Rix’s daughter Shelly (1951-2005) was born with Down’s syndrome and her parents were told to put her away, forget her and start again. Brian phoned the Ministry of Health and received the most awful letter: he was told about private homes for high-grade imbeciles. The words idiot, imbecile, Mongol, and cretin were used. In 1980, Brian had become Secretary General of Royal Mencap and set about raising the profile of the charity and public awareness of the needs and rights of people with learning disabilities for proper care and support — and for the opportunity to be part of their local communities. Brian stood down as Secretary General in 1987 and became President of Royal Mencap and in 1992 (age 67) he became a Life Peer. He is particularly proud of changing the charity’s constitution in 1998 to give people with learning disabilities more say in how it is run. Now, over half the people on Mencap’s national assembly have a learning disability: service users, as well as parents, have a big say. And Lord Rix has been a keen advocate for learning disabilities in the Lords.

In 2006 Brian’s book All About Us! was published by Royal Mencap and covered a history of learning disabilities and public attitudes. 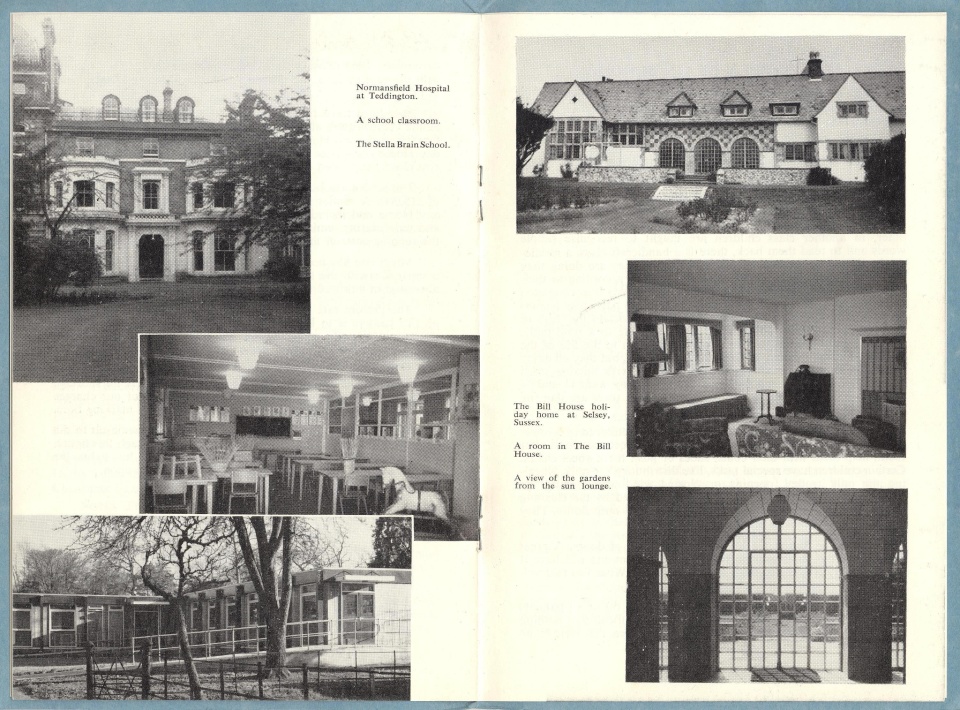 Normansfield was home to 200 mentally handicapped people. Residents lived in houses (4 x 12 bed units were opened in 1981) and in the main building; and a new Activity Centre was also opened in 1981, with occupational therapy, recreational therapy and speech, art and music therapy. There were also visiting dentists, physiotherapists, chiropodists and hairdressers. So the League of Friends was active in recruiting volunteers to help in the Friends’ Shop, the Hydrotherapy Pool, the Toy Library, the various activities in the Stella Brian Centre and with escort duties on and off site. 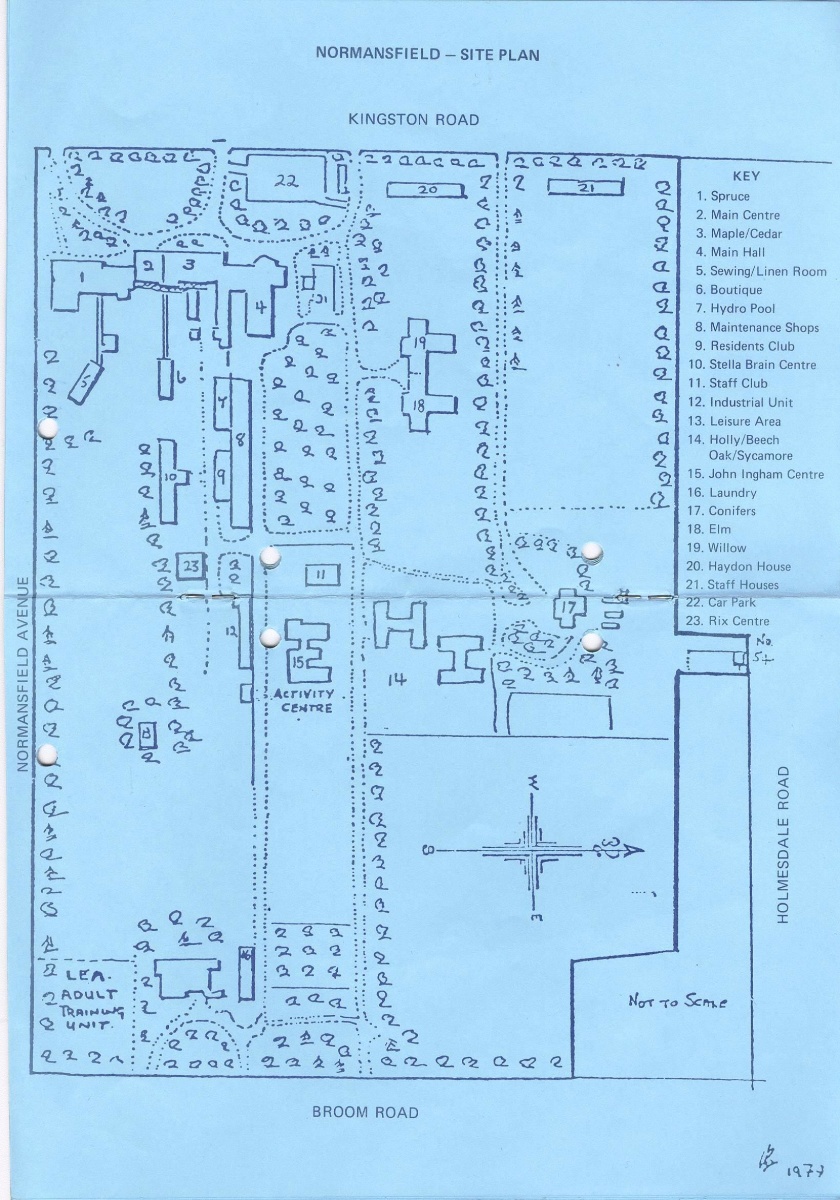 People were encouraged to join the Friends to help the residents of Normansfield and the mentally handicapped in the Community. Help was needed organising local fundraising events and with “public relations activities” to keep the problems of the mentally handicapped in the public eye. Mr Eric Spooner was the membership officer. The Richmond, Twickenham and Roehampton Health Authority produced A Guide for Relatives and Friends for Normansfield, including a site plan, comprehensive summary of services (including short-term care and Behaviour Therapy) and including reference to the Friends of Normansfield.

Changes in the 80s

In the early 1980s Brian Rix became the Chair and the revised “Objects and Rules of The League of Friends of Normansfield” adopted in 1985 set out the aims of the organisation to promote voluntary service in Normansfield and the community; promote good relations between the hospital and the voluntary sector; and provide funds to support the residents and ex-residents of the hospital and mentally handicapped people living within the Normansfield catchment area. The Council met regularly to conduct business and annual general meetings were open to all members. 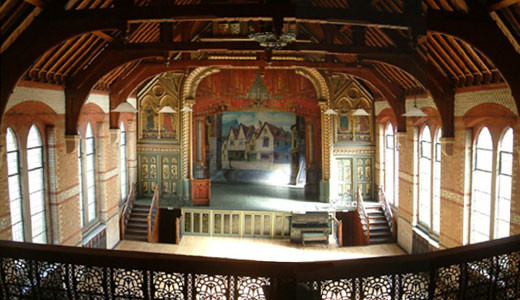 Changes in the 90s: the closure of Normansfield Hospital and the future of the theatre

A “Normansfield and Community Parents, Relatives and Advocates Association” had been set up, chaired by Eric Spooner and then by David Towell, with Pip Butterworth as Secretary and Maureen Wells as Treasurer. Parents were concerned about the implications of the Community Care Act 1990 which consigned old style residential institutions like Normansfield to history, paving the way for “Care in the Community” and for people with learning disabilities to live as part of their local communities. The decade culminated with the “Valuing People” White Paper of 2001 intent on ensuring a statutory underpinning to achieving rights and social inclusion for people with learning disabilities.

The gradual closure of Normansfield Hospital and the resettlement of the residents to small community homes, mainly in the borough of Richmond upon Thames, happened during this decade. Lord Brian Rix (created a life peer in 1992) stressed that the Friends would continue to fund projects that enhanced the quality of the lives of people with learning disabilities – for example help with holidays, specialist equipment, leisure and education – but would not make up shortfalls in statutory funding. The Chair (Brian Rix) and the Treasurer (Derek Newman) welcomed applications. In addition, the Friends contributed towards the building of a hydrotherapy pool in the community, where people with learning disabilities were given priority booking.

Following the final closure of Normansfield in 1997, the site was sold by the Health Authority for residential development, including four houses specifically for people with learning disabilities (12-18 Langdon Park). But the old Normansfield Theatre (Grade II* listed as a rare example of a private Victorian theatre containing original painted scenery and other ornate fixtures and fittings) was protected and is now part of the wonderful Langdon  Down Centre which is the HQ of the Down’s Syndrome Association and home to the Langdon Down Museum of Learning Disability which opened in January 2012.

Just before it ceased to exist, the GLC (Greater London Council) made a donation to the Friends of Normansfield to spend as thought fit on the upkeep and refurbishment of the theatre. Working with the Theatres’ Trust (John Earl and Peter Longman) the precious Rudigore panels and Victorian scenery etc. were safely stored off-site while refurbishment of the theatre was undertaken. The planning permission for the site required that English Heritage and the Theatres’ Trust specify the works to be carried out in the Theatre Wing of the main building, and for the theatre then to be used solely as a theatre, museum, public exhibition/community hall for concerts and the display of works of art. By 2003 the refurbishment was complete and The Friends transferred units in the Family Charities Ethical to the Langdon Down Centre Trust. (The Langdon Down Centre Trust merged with the Down’s Syndrome Association in April 2010.)

1996: Hundredth anniversary of the death of John Langdon-Down: Conor Ward

The Down’s Syndrome Association published in 2007 Tales of Normansfield: The Langdon Down Legacy by Andy Merriman, available from the Langdon Down Centre.

Before the closure of Normansfield, the Friends funded a research project by Heather Cadbury to capture from documents and interviews personal accounts of life in Normansfield from residents, staff, family, advocates and volunteers. This “living history” reminiscence included descriptions by Elspie Cusden (grand-daughter of John Langdon-Down) of the Christmas preparations and the special celebratory meal on Christmas Eve, with Tony Langdon-Down (grandson of John Langdon Down) acting as one of the waiters, serving the meal to patients and staff. The family were also involved on Christmas Day, handing out presents to all the residents. And the theatre came alive at Christmas, with residents, friends and relatives in evening dress to enjoy the entertainment. Tapes and transcripts of the project are stored in the Langdon Down Museum and include Work in Private Days; The Role of the Theatre; From the Art of Society to the Science of the NHS; and The Changing Goal Post of the NHS. Heather also produced Exploring Experiences of Advocacy by People with Learning Disabilities.

Revised “Objects and Rules of the Friends of Normansfield” were adopted in January 2002 and expressed the aim of the charity to promote public interest and awareness of learning disability; promote partnership working; provide funds to support ex-residents and people with a learning disability living in the boroughs of Richmond upon Thames and Kingston upon Thames; support volunteers for services for people with learning disabilities; provide a link with other voluntary sector organisations; co-operate and encourage communication with all other bodies to improve services for people with learning disabilities. The Council would continue to meet regularly to conduct business and annual general meetings would continue to be open to all members.

On Sunday 8 July 2007, the Friends of Normansfield held an anniversary tea party with music and entertainment in the Normansfield Theatre for former residents, friends, staff and anyone associated with Normansfield.

2012 – Creation of the Normansfield and Richmond Foundation

At the AGM 14 January 2012 a revised draft Constitution was discussed and revised objects agreed as follows and agreed with the Charity Commission:

“To provide relief for people with a learning disability who were previously residents at Normansfield or are currently living within the London Borough of Richmond upon Thames or have close connections with Richmond upon Thames, in particular by the provision of financial help and support for them and their family dependents and carers”.

It was also agreed that the name of the charity should be changed to the Normansfield and Richmond Foundation.

The Foundation has an investment portfolio which generates an annual income. The Committee meets 4 times a year and makes grants to individuals with learning disabilities and to organisations in the borough that support people with learning disabilities and their families – including Richmond Mencap and the Gateway Club. The Foundation also supports the annual Learning Disability Awareness Week events.