You are here: Home » Dr John Langdon Down

‘Langdon Down, The Legacy’

A short film about the extraordinary Victorian building in London which is home to DSA UK.  Built by Dr John Langdon Down in 1868 as a place where people with learning disabilities could be cared for and educated, it is widely regarded as the ‘spiritual home’ of Down’s Syndrome.

John Langdon Haydon Down was born on November 18th 1828 at Torpoint in Cornwall. He was baptised in the Bethel Independent Chapel. In 1868, he changed his name to John Haydon Langdon Down. His father, Joseph Almond Down described himself in the census return and other official documents as a grocer. As a young man Joseph Almond Down had had some experience of the drug trade and when the Act for the better regulation of the practice of apothecaries was brought in in 1815, it was possible for him to lay claim to the title apothecary. After that date apothecaries, who from then on were recognised to have a medical function, were required to be registered by the Worshipful Society of Apothecaries and examinations were required. Proof of qualification for the period prior to 1815 only arose if an apothecary’s bill was challenged in the courts. Joseph Almond Down’s claim to the title of apothecary was put to good use later when Langdon Down presented himself for Certificate of the Worshipful Society. He was in a position to state that he had been apprenticed to an apothecary. Apprenticeship was one of the routes which could be taken towards certification. 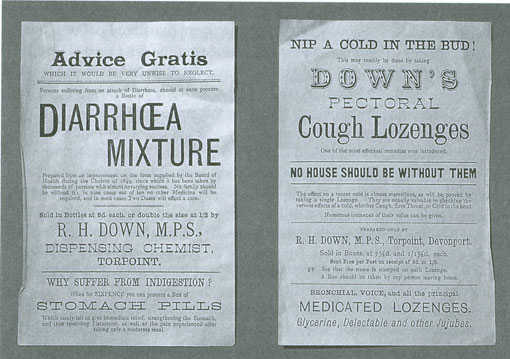 In 1830 Joseph Down was listed as a druggist, grocer, and linen draper. He had failed in business on three occasions. Langdon Down, in his later years, often referred to the perils of bankruptcy. The family home was at 26 Fore Street. This was a small terraced house. It had been converted into a shop and in 1836 the house next door was purchased and the ground floor was knocked into one. The Downs’ neighbours were artisans. Carpenters, joiners, masons, shipwrights, sail makers and rope makers lived in the houses nearby.